A past student of the School of Agriculture, Mr. Andrew Kojo Morrison has donated assorted Sakata vegetable seeds valued at ¢7, 000 to the School to support practical sessions at the Teaching and Research Farm.

The donation was made up of carrot, broccoli, carrot, watermelon, squash, onion, beetroot, cucumber, cabbage, and cauliflower seeds.

In his remarks at a ceremony to present the seeds, Mr. Morrison noted that as a former student and Teaching Assistant at the School, he realised that students always had difficulty in getting seeds for their project work. He noted that the donation was to support the School to provide students with good seeds for their projects on the field. “I decided to remember my past and see how I can support my younger brothers and sisters at the School of Agriculture by giving this token amount of seeds,” he explained.

Mr. Morrison who is a former President of Ghana Association of Agriculture Students (GAAS), UCC chapter, indicated that after his national service, he was inspired to establish Seed Hub Classic, a vegetable import and distribution company in 2018. “Seed Hub is the sole distributor of Sakata seeds in Ghana. Our seeds are one of the best you can find in the world and the Teaching and Research Farm has purchased some of our seeds already and they can attest to its quality and high yield,” he noted. 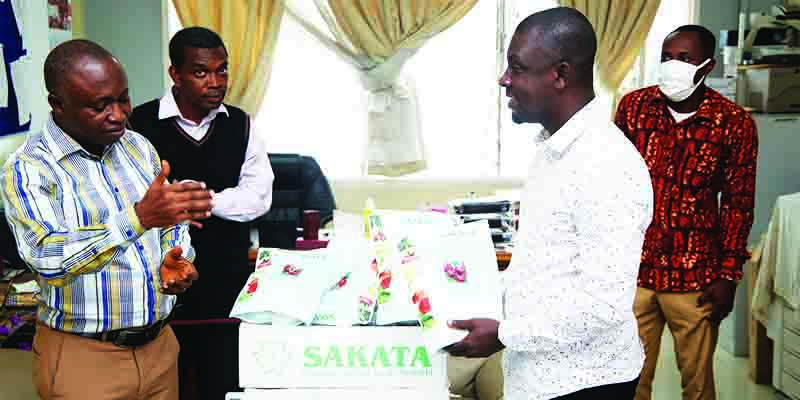 Mr. Morrison urged his alumni colleagues to support the School to enhance its training of students to contribute meaningfully towards the development of the country. “I believe this will motivate the students and also serve as an example for my colleagues and other former students who are out there making it in life to look back to the School that gave us the opportunity and training to be where we are now,” he added.
He thanked the Dean and lecturers of the School for the opportunity and pledged his continuous support from time to time.

The Dean of the School of Agriculture, Prof. Elvis Asare-Bediako, who received the seeds thanked Mr. Morrison for the donation. He said the General Agriculture programme of the School was not only aimed at preparing students to become professionals in the Agriculture sector of the economy but also to create their own jobs after their studies. “We want our students to be ‘Agripreneurs’ and not only focus on white-collar jobs,” he pointed out. He  assured that the seeds would be given to students to help them undertake their project work. Prof. Asare-Bediako called on other past students of the School to emulate the gesture.

The Acting Head of the Teaching and Research Farm, Dr. Ebenezer Gyamera, said he could attest to the quality of the Sakata seeds adding that “The seeds are very superior in terms of disease resistance and it is high yielding too”. He said the profit margin for cultivating the Sakata seeds was far higher as compared to the ones from the ordinary market.

Present were the Vice-Dean, Prof. Henry De-Graft Acquah and some lecturers in the School of Agriculture